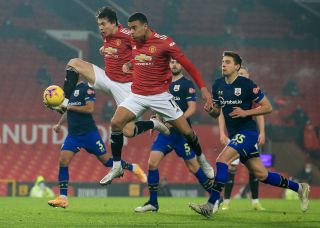 Ian Wright feels Mason Greenwood needs to up his game after he failed to score in Manchester United’s 9-0 win over Southampton.

The 19-year-old played the full 90 minutes as United ran riot against the Saints, scoring nine goals and dominating the match from start to finish.

Greenwood managed an assist during the game but failed to find the back of the net. Personally, a night we scored nine goals I find it strange to be pointing the finger at a 19-year-old for not adding to the tally…

But the youngster has only managed to score one goal in his last 10 appearances for United in all competition, scoring four in total so far this term.

And we gave Greenwood a rating of 7/10 after the Southampton match!

Former Arsenal star Wright feels Greenwood should have been able to find the net against Southampton. Asked if he was disappointed with the young forward, Wright told Premier League Productions (via The Metro): ‘Yeah because he’s a forward and he needs to score at the minute.

‘I didn’t see Mason Greenwood in the middle of the goal too many times on a day in which there was goals to be had.’

Anyone who has watched United in recent weeks will be able to tell you Greenwood has improved after struggling earlier in the season. I don’t think there’s a lot to worry about but he needs more games under his belt.