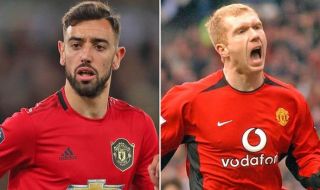 Manchester United legend Bryan Robson has identified something in Bruno Fernandes that he feels can lead the team on to silverware.

People will jump to the goals, the assists and how Bruno Fernandes is the best penalty taker in the Premier League, but Captain Marvel appreciates another side to the Portuguese midfielder.

Robson reiterates his belief that Fernandes is the closest thing he’s seen to Paul Scholes which is an almighty claim from a fellow United legend. Plus, Ole Gunnar Solskjaer has said the same about Fernandes and Scholes, as per GOAL.

Moreover, this is praise from arguably the best captain Manchester United ever had. Robson was a fearsome leader in the 1980s and 1990s and he has made it clear that he rates Fernandes highly.

“What I do like is watching Bruno, because he’s got quality on the ball and work-rate and everything,” Robson told United’s official website. “But, what I like to see, when something doesn’t come off, or the ball goes dead, is you can see him talking to the players around him.

“He’s trying to organise and is talking and whatever he’s saying, I’m not bothered about what he’s actually saying because you know it’ll either be encouragement or a rollicking for somebody.

As one of the most influential players in the Premier League, Robson believes you can draw similarities in Scholes’ game when watching Fernandes.

“As soon as he came in, I think that I watched him in the first six or seven games and his work-rate and his quality on the ball, you can see that right from the start,” Robson added. “I couldn’t give him a higher accolade than what I said he’s probably the closest thing to Scholesy I’ve seen.

“His vision, touch on the ball and always wanting to be on the ball, and then the quality of his finishing and passing. That’s why I’ve said he reminded me of Scholesy and I’ve seen nothing to change my opinion over the last year.”

Fernandes added to his tally for the season on Tuesday night when he scored a penalty in United’s 9-0 win over Southampton.

He has become United’s talisman over the past year and former United youth player Ben Thornley told us this week how Fernandes compares to Eric Cantona.