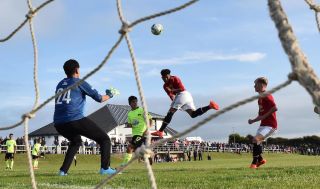 Manchester United winger Shola Shoretire has reportedly snubbed the likes of PSG and Barcelona in favour of signing his first professional contract with the Red Devils.

Since joining the Red Devils’ academy, Shoretire has featured in 34 matches and has been directly involved in eight goals, in all competitions.

After impressing throughout his youth career, Shoretire is believed to have attracted the interest of some of Europe’s biggest clubs.

According to a recent report from the Daily Mail, the youngster has agreed to commit his professional future to United.

The Mail also claim that Shoretire’s desire to remain in Manchester has seen him reject the interest of PSG, Barcelona, Bayern Munich and Juventus.

Shoretire’s first contract has been described as ‘lucrative’, with the teenager set to have a big future ahead of him as he looks to follow in the foot steps of Marcus Rashford and Mason Greenwood.

It is understood that several under-23 coaches have tipped Shoretire to force his way into Ole Gunnar Solskjaer’s first-team plans with the youngster expected to debut this season.