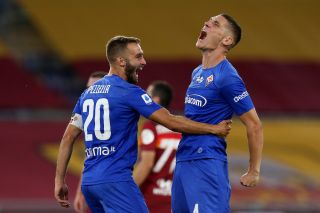 Milenkovic, 23, joined Fiorentina in 2017 after making a £4.59m switch from Serbian side Partizan, as per Transfermarkt.

Since joining Fiorentina, Milenkovic has featured in 118 games in all competitions and even has 10 goals to his name.

In light of his impressive performances, the talented right-footed centre-back has grown to become one of Italy’s most sought after defenders.

According to a recent report from Italian outlet La Repubblica (as relayed by Calciomercato) the impressive defender, who has been a target for United since the days of Jose Mourinho could finally be set to make the move.

The outlet claims that alongside United are also AC Milan, Inter Milan and Juventus, all of whom are believed to be keen on landing the Serbian defender.

Milenkovic’s contract with Fiorentina expires during the summer of 2022 and it is now being widely reported that he is set to turn down a renewal offer.

La Repubblica claim it is Ole Gunnar Solskjaer’s Red Devils who are in ‘pole position’ to sign Milenkovic with the defender expected to reject approaches from other Italian clubs.