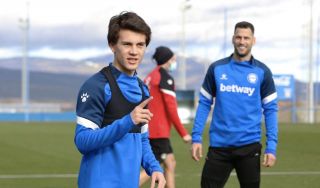 The Red Devils turned their attentions to the young Uruguayan in light of his impressive form for former club CA Penarol.

After moving to United, Pellistri was placed with the club’s under-23s where he continued his form which included three goals and one assist in his first eight appearances.

In an attempt to see the 19-year-old continue his impressive development, the Red Devils’ hierarchy sanctioned a short-term loan move.

Despite strong interest from several clubs, La Liga side Deportivo Alaves won the race to land the highly-rated teenager.

Speaking to the Sports Mail about what the Spanish club expect from Pellistri and why they were so keen to bring him in, president Troconiz said: “We have full confidence in him and this is why we really fought to get him in on loan.

“We really think he can contribute a lot to us.

“We are fully aware he is a young player and he is beginning his European career and he will need to improve.

“But we think we are an ideal team for him to improve with because Alaves is a small club and I think this could favour his improvement.

“We are convinced that he is going to help us have a magnificent second part of the season.”