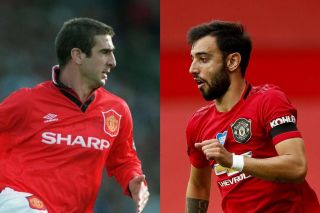 Bruno Fernandes is Manchester United’s talisman at the moment, just like Eric Cantona was.

The Frenchman arrived at Old Trafford in December 1992 and guided the Red Devils to four Premier League titles in his five years at the club.

Fernandes arrived a year ago and has yet to win anything at the club, though comparisons with Cantona are still being made and former Manchester United player Ben Thornley has backed them up, as someone who played with Eric The King.

As The Athletic (£) write, Manchester United wanted a winner — and they got one in Fernandes. He has lifted the players around him, and the team has significantly improved from his impact.

The Portugal international himself has dismissed talk likening him to Cantona but his goals and assists this season speak volumes. Fernandes told talkSPORT: “Of course for me it is really good to listen (to people) talking about those names.

“But really for me, Cantona was an amazing player for the club, I need to do much, much, much better to be compared with him. I’m really happy for what I did. I’m not satisfied, like the coach said.”

On the Strettycast, I caught up with Thornley and asked him about Eric Cantona. The Frenchman is described as a “gentleman” who took time out to give back to the supporters after training at the Cliff.

“Eric was a gentleman. He was the one person in the dressing room at that time where Sir Alex Ferguson would want us to witness the way he prepared for things,” Thornley told Stretty News. “If we were lucky enough to be in the dressing room for a first-team game when we were in the squad or just about the make our debuts, etc. He would always be the one person that Sir Alex would say ‘look at his preparation,’ ‘look at his focus,’ or ‘look at the way he dusts himself off and just prepares mentally for what he’s about to do’.

“I didn’t have many dealings with him because my first-team involved was limited, but when I did train with Eric — and I was lucky enough to play in a couple of games with him as well — he was an absolutely gentleman and always gave the time to say hello and have a chat with you. I always remember that when the Cliff training ground had school holidays the fences went up, so the fans could come in but not approach any further. Eric Cantona always — even though he was the last one through the door — was the last one to leave training. He stayed on the training ground longer than everyone else and he then went outside and wouldn’t leave until everyone’s autograph was signed.”

On comparisons with Bruno Fernandes, the Class of 92 member added: “Certainly with the way Eric had an immediate impact and the way Bruno has done that. I can understand why there would be a comparison as to how he’s done it. You get an impression that one person, and just that one person, can come in and lift and whole side. Bruno has done that. And probably in terms of where Bruno has got United to over the last 12 months, even more so because of the goals and assists he scored. As much as Eric scored some extremely important goals and won games by himself, I think Bruno has done that in his first season. There are definitely comparisons that are very much justified.

“You see many players come in that don’t live up to the hype. They’re not able to cut it at a club like United, but Bruno Fernandes is like Eric Cantona and Wayne Rooney when he came in. It’s important to remember what he [Rooney] did on his debut when he scored the hat-trick against Fenerbahce. I can understand why a comparison could be made with all three of these players.”

The rest of our episode with Thornley can be listened to on Spotify, Apple Podcasts and aCast. Simply search ‘Strettycast’ into your favourite podcast platform.