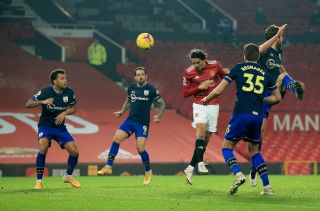 This is not the news we wanted because Cavani hasn’t played enough football this season due to suspensions and niggles. After scoring a powerful header against Southampton most fans thought he was removed at the break to keep him rested for Everton at the weekend.

But it could turn out to be more serious than that…

United made easy work of Southampton last night as they won 9-0 at Old Trafford to equal the biggest win in Premier League history (a record they own after beating Ipswich Town by the same scoreline in 1995).

Cavani scored United’s fourth before the break after converting a cross from Luke Shaw with his head. It was his first goal at Old Trafford.

However, before the end of the first half, Cavani was fouled on the edge of the penalty area by Kayne Ramsay. He sustained a knock in the process and Solskjaer decided to take him off at half-time.

Speaking to United’s official website, Solskjaer said: “Edinson got a bad tackle on his ankle so he had to come off.

“He probably would have loved to be out there scoring goals. But there was no point in taking any risks. Hopefully, it won’t swell up too much.”

Anthony Martial came off the bench and we were delighted to see him among the goalscorers again.

Read more: Video: Solskjaer explains what he liked from United’s 9-0 win over Saints