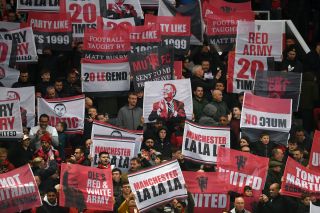 After experiencing some forum threads and posts from the Twitterati and fan channels of late and some of the great work by @DaytrippingRed on calling these lot out with his recent Stretty News piece. I decided this is a good time to unleash this article.

The net is narrowing on these so called fan channels and respected content providers like @Malachians (Phil Brown) are beginning to call them out publicly and see them for what they are. Exploiters of our fanbase many of them overseas who think they know the script and ins and outs of the club. Like they know who we are signing next. What the line-up will be for the next game. It would appear, that in this case, The United Stand led by Mark/Brent Goldbridge is getting greedy and think they have a monopoly on content and interviews.

Phil Brown is a very amiable and down to earth guy and for him to get outraged by their behaviour tells its own story.

So, let’s go over exactly what is meant by the term Top Red? Why is it considered a derogatory term and what does this mean to you?

From experience it seems to be branded around anyone mentioning the following:

By the same token there are good supporters and bad supporters. There is also a very real difference between a supporter and a fan.

You can’t tell me that someone who drags their backside out of their matching United bedspread and pyjamas is showing the same level of commitment as a die-hard Stretty Ender who goes to both home and away games, sometimes getting into debt just to go to the games for the love of the club (yes, I do know some lads like this, United is EVERYTHING to them).

For those European aways takes time off work, time away from family – spending his/her hard earned on travel and tickets is not a better red than many. I’m not having it, its totally untrue and disrespectful of the lads who give everything they have to going to watch the team. I’ve known lads who’s marriages have been in trouble because of this commitment. Remember the flag that goes around (United, Kids, Wife) in that order. This is the mantra and dedication to the club, it’s real and it’s everything. 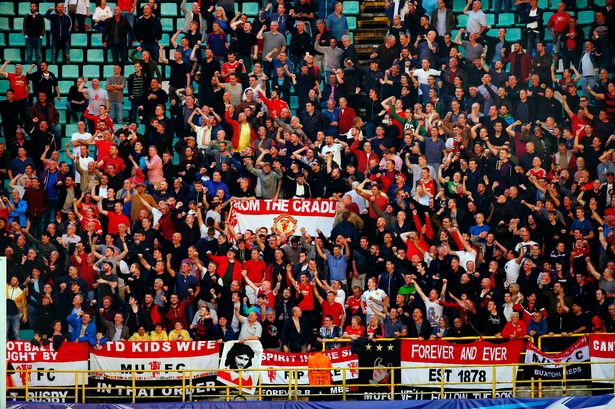 Yet certain United fans seem to be very defensive about this. Comments like:

Where does this stem from, is it their own insecurities as a United fan? My dislike of the Scousers for example isn’t just down to football. It was indoctrinated from my grandad who hated them with a passion (and my great grandad before him apparently) following the ship canal fallout. It runs deep, you can’t possibly understand this unless its real and you are there and it matters, it’s huge in context. I’m sure other match goers have similar tales, being chased around Stanley Park for example.

With modern day football we have the arm chair fan, Facebook and Twitter brigade poisoning our great club, and yet, the loyal supporter can’t say nothing, or reason with these people without the Top Red card being played.

Probably one of the most famous so called Top Reds is Andy Mitten.

Andy Mitten has been writing about football for 25 years, beginning by founding United We Stand, a Manchester United fanzine and has written for most English newspapers and several books and now also at The Athletic. He began writing about Spanish football in 2001 and now lives in Barcelona, covering Barca as well as his boyhood club Manchester United.

Mitten also gets a lot of this kind of abuse much the same as others who dare to question, or hint, that they may know better. It wouldn’t happen in any other walk of life. If I supported an American football team (which I don’t, I hate it by the way) I’d fully expect to not know the ins and outs of the rivalry or understand it. How it matters more (no Scouse pun intended) or the sacrifices we make to watch our team. How could I and why should I be bothered if called out on this? Not in our precious snowflake Twitter fanbase.

Andy is a voice of reason currently for United fans of a certain persuasion. Why? Because he knows about fan culture and runs a fanzine, the club, United have been in his family for generations and he just so happens to be a damn good journalist.

Also, why should we have to feel privileged for being born in Manchester or having real connections to the club who get it? I know lads who travel to Old Trafford week in and week out from the likes of Ireland and Bournemouth. Real commitment, from real reds not subscribing to super chats and fan forums and at the first chance spouting total tripe all over the social media platforms. You can spot the real fans a country mile off.

This type of fan (and I stress fan rather than supporter) doesn’t care about ticket prices or who owns the club because it doesn’t affect them directly. They form their opinions through the media and go about analysing tactics as if they should be perched on the Match of the Day sofa, passing on the opinions of others as their own.

Message boards are full of them (and the majority of them talking tripe, check out the match day threads on any forum or Twitter), same red breed in theory, but a different species who has nothing in common with the match-going Red.

They don’t know what it’s like to be a supporter because they’ve never been one, never been treated like cattle outside an away end, never pulled their hair out because they were missing a token (or credit) to get a cup final ticket or an away game, never had to consult their bank manager before applying for that European away. Couldn’t care less about the increasing costs of attending games to see your club and so on. Some say you should be privileged to have this problem. This is just a cast away response, the fact is when you have grown up around the club you support and love why should you? Do you feel privileged to go to your local school or library? Easy thing to say when you are at a distance and not supporting the club in amongst it week in, week out.

It’s not being precious and at the other end of the extreme there’s nothing more boring than the Über red who defines his life through the reflected glory of the football team, but true Reds who actually go to matches are now in an overwhelming minority and we are beginning to get our voices heard.

Every time United lose a game which has been more and more often the past few years and quite topical this week with the results against Sheffield and Arsenal. A Sheffield team who defended like Baresi’s Italy only to turn into keystone cop defending at our noisy neighbours this week, typical. We have to contend with thousands of these muppets slaughtering individual players and even taking that to sickening new levels with Axel, Tony and Marcus this week. Then demanding new signings they’ve heard about playing FIFA on their consoles. They don’t represent the views of most who go. Twitter is full of crap like this for example and before you know it this diatribe is being adopted by others and it spreads like a disease. You can look at any tweet on social media after a bad result.

Typical of the first ones to jump on anyone with the Top Red retort. The United haters in our midst will hide back into the shadows after a good result, but they’ll be back soon enough (RB Leipzig, Sheffield, Arsenal), with their worthless bile as soon as United lose another game. Watch out for them and wonder when being a supporter changed so much.

This is the modern fan channel fan (not supporter remember), the knee jerk brigade, the faceless fanbase who crave instant success and believe it is a teams god given right to win a football game just by turning up. No more is this true than of the fickle United fan who have been spoiled since the Premiership began (blame Fergie). It is the swell of this uneducated fanbase that is poisoning social media with the Ole out rants (or any manager before him it doesn’t matter to this lot), some after only a few games. Luckily the crowds at Old Trafford and particularly at aways show more support and are prepared to give Ole time to build. I know it’s been a while now but we need to get back into stadiums up and down the land to get our voices heard and get some perspective, to set the standards. It’s been a real eye opener for me during lockdown to see what’s going on during games.

That’s not to say we blindly support Ole no matter what but judge him at least after two seasons in the job, with appropriate backing bringing in the players he wants and that progress is being made in the right direction.

Ole is made of sterner stuff (he isn’t called the Silent Assassin for nothing) and he has shown some steel in the last few months, he’s had to. Changing managers at the drop of the hat is not the United way, it never really has been bar the odd occasion. The era of building a football dynasty maybe over these days, but as a lifelong United fan I would love the club to make a stand for this tradition. A club needs to stand up to the constant crap of chairmen and media madness that is prevalent in the modern game, I hope it’s us that can show footballing values are not lost and can still work.

Most United fans in the know will be continuing to support the club, players and manager through what is, and what was always going to be, a turbulent transition period striving for that consistency and our DNA back. The hopeless romantic in me would love to see Ole win something and shut this lot up? Wouldn’t you, admit it?! Just how much better would it feel being in the ground winning something under Ole (loved as a player and as a manager, he gets the fans and the club). That would be the stuff of dreams. You can’t buy memories like that they live on for generations through families.

Don’t let faceless keyboard warriors play the game of one-up-manship with you. Call them out. Some of us are better fans/supporters thats just simple facts. It’s just the way it is with United and with life.

See you on the other side, if you’re not there you would be no great loss anyway!

4 responses to “What exactly is a Top Red?”