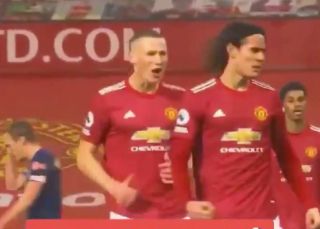 Scott McTominay was like a child on Christmas morning.

The Manchester United midfielder couldn’t hide his delight after Edinson Cavani scored to make it 4-0 — and the Red Devils went further to win the game 9-0 on the night.

It was a sensational performance aided by Alexandre Jankewitz being shown a straight red card for a horrific tackle on McTominay inside the first two minutes.

But to see the Scotland international to play on, score one himself, and celebrate Cavani’s goal in such a way is a real delightful sight on the eye.

He loves United and you can tell that from most performances.

McTominay is seen shouting “golazo” at Cavani after United’s fourth goal of the night.

Next up for United is Everton. We’ll need everyone — including McTominay — at their best against the Toffees.