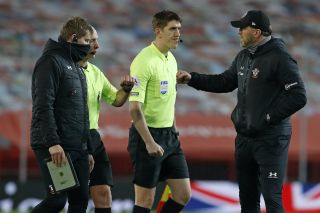 Southampton have reacted pathetically to the roles played by Mike Dean and Lee Mason in their defeats to Manchester United and Aston Villa by ‘demanding the pair don’t referee their games in the near future’.

If that doesn’t get them in extra hot water with the Football Association, I don’t know what will, but it’s a perfect example of a football club throwing their toys out of the pram.

According to the Radio Solent’s sports editor Adam Blackmore, Southampton made the extraordinary request after losing 9-0 at Old Trafford on Tuesday evening. Two Saints players were sent off during the match: Alexandre Jankewitz and Jan Bednarek.

Mason was referee for their 1-0 defeat to Aston Villa over the weekend — denying the Saints a penalty and they also had an injury-time equaliser ruled out for offside.

How on earth can Ralph Hasenhuttle have this stance when Jankewitz was sent off for a tackle that could have seriously injured an opposing player? It’s completely mad but so was the sending off for Bednarek.

Southampton are not going the right way about this, are they?