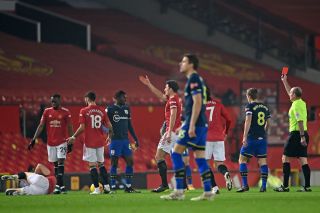 The 19-year-old was handed his first Premier League start by Ralph Hasenhuttl at Old Trafford with no other midfielders available following injuries to Ibrahima Diallo and Oriol Romeu.

But after just 77 seconds he was sent for an early shower after being shown a straight red card.

The tackle shocked Dublin and Len Osman, with both former players speaking on Match of the Day late on Tuesday night.

“Yes, it is absolutely disgusting,” said Dublin (via Hamsphire Live). “It is, for me as an ex-player, that is potentially a career-ending tackle.”

I thought the same when I first saw the challenge — but lucky McTominay got away with a scratch. He didn’t let the early incident ruin his overall performance because if it anything it probably gave the Scotland international a kick up the backside.

Osman, partnering him in the studio, added: “He has got it absolutely wrong there.

“There is no defending that, I will say, over-enthusiasm and as Dion says that clearly, clearly, endangers the opponent.”

It’s not good enough, at this level, having players rushing into tackles like that and McTominay could have been seriously hurt.

Read more: Video: Solskjaer explains what he liked from United&#8217;s 9-0 win over Saints