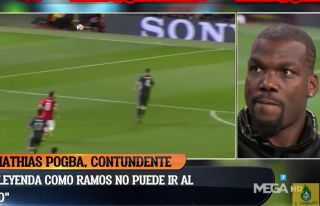 Paul Pogba’s brother has added fuel to rumours that the midfielder is approaching the final stages of his Manchester United career.

Mathias Pogba, who plays for Racing Murcia in Spain, has confirmed that his brother is content in his current surroundings, but also claims he has not seen any hints that he will commit to United beyond the expiration of his current deal in 2022.

“He is happy. He is improving his game,” Mathias Pogba told El Chiringuito, whilst speaking about his brother Paul.

“He has a year left on his contract. I don’t know [if he will stay until then]. I can’t help you right now.

“I haven’t heard anything about him renewing his contract.”

Pogba didn’t feature last night as United beat Southampton 9-0, instead he was one of the players rested to play Everton at the weekend.

The World Cup-winner was voted Manchester United player of the month for his performances in January, which bodes well for the rest of the season. If Pogba can kick us into the next level between now and the end of the season I will be very happy.

Now it seems like Pogba is trying to give something back before it’s too late.

However, having your brother running his mouth in the press won’t help anything.

They’re all spending too much time with Mino Raiola.