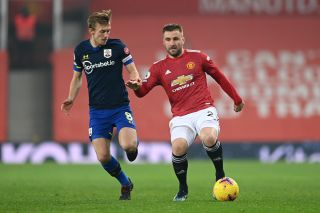 It was a proper cricket scoreline with Manchester United battering the Saints all over the pitch, but it comes during a time a big win was needed after drawing with Arsenal and losing against Sheffield United.

A section of United fans on Twitter have heaped praise on the performance of Luke Shaw during the game last night.

United were handed a man advantage after just two minutes when Saints midfielder Alex Jankewitz was sent off for a horror tackle on Scott McTominay.

Ole Gunnar Solskjaer’s side went on to make the most of the opportunity as they put nine goals past Southampton to equal our Premier League record, previously achieved against Ipswich Town in 1995.

Shaw wasn’t the only player to stand out against the Saints but he deserved the recognition after taking his superb form from January into February.

Luke Shaw’s first half vs. Southampton by numbers:

Pretty mad that Luke Shaw is still only 25. He's in his 7th season at the club but is having far and away his best campaign. He looked great for a handful of games for LvG before his injury and that was as good as it got for consistent form. Ole's chats have worked wonders. pic.twitter.com/LX6knggJBZ

Luke Shaw oozing with confidence, this has been some turnaround for him. 👏🏻

I've spent all season talking about what Luke Shaw and Aaron Wan-Bissaka must do to take #MUFC to the next level. Tonight, we've seen what that means & how you execute. I'm delighted with both. This is the standard we expect from the full-backs. This is the modern game.

Luke Shaw is arguably playing the best football of any fullback in the Premier League. He’s on another level — his game is so complete.

Luke Shaw; outstanding yet again for #MUFC. Consistently, one of the best performers for a number of weeks now. He has taken his game to the next level. Competition for places is crucial. Shaw & Utd are benefiting from the arrival of Telles. He has risen to the challenge.

Luke Shaw is actually flying at the moment, on form is an understatement.

Luke Shaw is playing out of his skin at the moment. What a revival.

Luke Shaw is officially back to his best 😍🔥🔴#MUFC pic.twitter.com/9dHVJO8OML

The English left-back was nominated for Manchester United player of the month in January. He came second in the voting as Paul Pogba won the award.

I think he’s definitely in with a shout of being called the best left back in the Premier League this season.

Read more: Video: Solskjaer explains what he liked from United’s 9-0 win over Saints