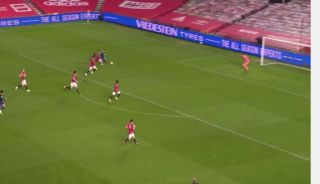 The linesman’s flag went up for offside but we still enjoyed Aaron Wan-Bissaka’s tackle.

Aaron Wan-Bissaka’s ability to tackle as clean as a whistle is remarkable. When it comes to defending I don’t think there’s many full-backs who can rival him.

Danny Ings was played in by a dangerous through ball but Wan-Bissaka was alert. The Southampton striker was also in an offside position.

But take nothing away from Wan-Bissaka. He played it safe and made a fantastic lunge to win the ball.

Let’s hope they can keep a clean sheet!