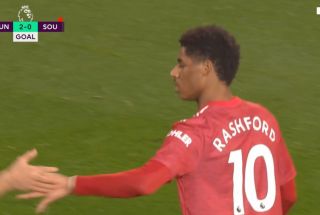 Manchester United are in total control.

Another good goal for Manchester United makes it 2-0 in our favour against Southampton.

Luke Shaw sent a stunning cross in for the first goal, converted by Aaron Wan-Bissaka, and the left-back was involved in the second goal as well.

Marcus Rashford was in the right place at the right time but United sliced Southampton open thanks to Shaw and Mason Greenwood down the left flank.

It was Rashford’s 15th of the season.

10-man Southampton are finding it difficult to deal with United’s firepower, and David de Gea has just saved a penalty at the other end.