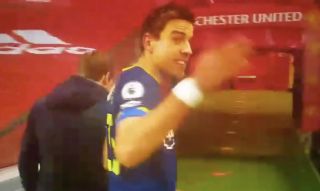 Manchester United were on top form during Tuesday’s Premier League match against Southampton after thumping them for nine.

Despite what was a brilliant display all evening from the Red Devils, which included goals from Marcus Rashford, Bruno Fernandes, Scott McTominay and a brace from Anthony Martial, all the talk after the match seems to be about a dubious VAR decision.

United were awarded with a late penalty after Jan Bednarek clipped Martial in the box which consequently upheld referee Mike Dean’s on-field decision as well as brandished the defender with a red card.

On his way down the tunnel, the Saints defender was overheard telling officials that even Martial disagreed with the decision.