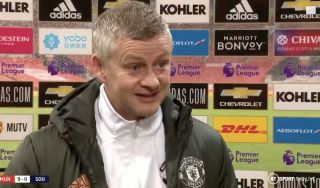 The Red Devils came into Tuesday’s match hoping to get back to winning ways after taking just one-point from their last three domestic games.

A shocking tackle from midfielder Alex Jankewitz after just 79 seconds saw the Saints go down to 10-men which more or less sealed the south coast side’s fate…. And that was before Jan Bednarek was also shown red late-on for a last ditch tackle on Anthony Martial.

Despite playing against a side who spent the entire match camped in their own half, Solskjaer watched on as his side were at their clinical best.

Speaking after the game, Solskjaer hailed his side’s professional approach to the match’s much changed complexion and also took the time to slam Jankewitz’s decision to endanger McTominay.

“We’ve been waiting for the forwards to show their magic.”