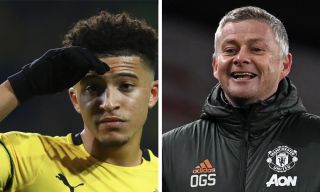 Manchester United manager Ole Gunnar Solskjaer may have dropped his biggest hint yet that the club may not reignite their interest in Borussia Dortmund’s Jadon Sancho.

It has been no secret that during last summer’s window, United were desperately hoping to secure a right-sided winger with Sancho highlighted as the club’s first-choice, as per Sky Sports.

However, after a proposed move failed to materialise and with striker Mason Greenwood continually filling on the right-flank, talk of Sancho has gone relatively quiet.

Speaking after his side’s 9-0 thumping over Southampton in Tuesday’s Premier League match, Solskjaer took the time to praise right-back Aaron Wan-Bissaka for his developing attacking intent.

Whilst lauding his English right-back and hailing the ever-developing Greenwood, Solskjaer admitted that the club have struggled to nail down a natural right-winger.

However, after yet another decent performance from Greenwood, Solskjaer appears to be planning for a right-sided partnership between the pair.

“The right side has traditionally, over the years, been a bit of a challenge for us, going forward,” Solskjaer said. “We haven’t found a right-winger or a right-back to fill maybe the void by Antonio [Valencia] when he left.

“Aaron [Wan-Bissaka] is getting better. Mason [Greenwood] I thought his performance tonight was excellent, even though he didn’t score, and that’s a good thing. We scored nine goals and Mason didn’t get one of them.

“The two of them can form a very good right-side and I can’t remember the last time a full-back crossed for another full-back and scored at Man United.”