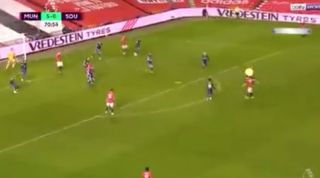 A man with a growing influence on this Manchester United side.

Scott McTominay has worked exceptionally hard to break into the first team and now he’s one of the first names on the teamsheet.

He took his goal very well tonight, too.

The ball rolls nicely out of the box after a poor Southampton clearance before McTominay had a crack from distance.

It gives Manchester United a six goal lead which is not something we get to see very often.

Alex Jankewitz is shown a straight red card after his challenge on McTominay. pic.twitter.com/wcLaKI1bzF