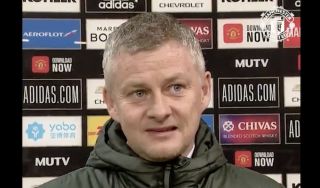 Manchester United are set to face-off against Southampton in Tuesday’s Premier League match, but one player who has been named on the bench is in-form midfielder Paul Pogba.

United come into Tuesday’s match-up looking to keep pace with rivals Manchester City at the top of the Premier League table.

After only picking one point from their last three domestic matches, Ole Gunnar Solskjaer will know he needs a win if he is to remain in the hunt for his side’s first league title since 2013.

However, surprisingly, in-form Pogba has not been named in the Red Devils’ starting line-up with Solskjaer preferring a defensive double-pivot of Fred and McTominay instead.

Speaking ahead of the match, Solskjaer has explained his decision to demote his World Cup winner to the bench.