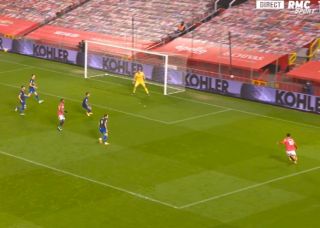 Manchester United have truly capitalised on their one-man advantage against Southampton at Old Trafford.

Ole Gunnar Solskjaer’s side have scored three goals inside the first 35 minutes and their latest has come in fortuitous fashion.

United’s crossing has been outstanding so far and Marcus Rashford’s fizzed delivery from the right was bundled into his own net by Saints defender Jan Bednarek.

Southampton had a nightmare start as Alexandre Jankewitz was sent off for a horrendous challenge on Scott McTominay after 79 seconds.

And Bednarek’s own goal means the Reds are already out of sight.