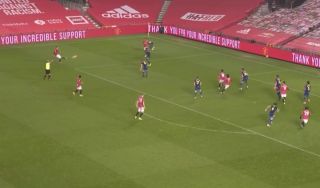 Manchester United have taken the lead against Ralph Hassenhutl’s Southampton after a brilliant quick-fire attack resulted in right-back Aaron Wan-Bissaka grabbing his second Premier League goal of the season.

After going down to 10-men just 79 seconds after kick-off, the Saints were always going to have their backs up against the wall.

Since debutant Alexandre Jankewitz was sent for an early bath after a shocking tackle on Scott McTominay, United have naturally been on the front foot.

However, despite their one-man advantage, Ole Gunnar Solskjaer will undoubtedly be pleased with his side’s clinical build-up which led to his side’s opener.