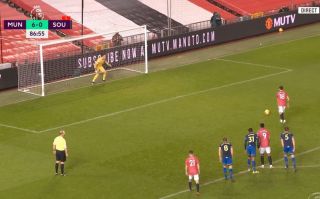 What a night for Manchester United!

Three points secured and a 7-0 lead thanks to a penalty from Bruno Fernandes.

All of our forward players have been on fire tonight, but United’s seventh goal caused a great deal of controversy. It felt like a long time for VAR to come to a decision and Mike Dean went over to the screen for a look himself.

He decided to send Jan Bednarek off for tripping Anthony Martial in a goalscoring position.

Fernandes was never in doubt from the second he stood up to take the penalty.