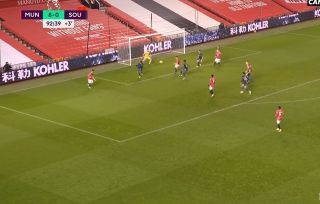 A Daniel James winner on a night Manchester United won 9-0.

The Reds were outstanding on the night and completely blew the Saints away.

They took a battering at Old Trafford and had two players sent off.

United took advantage and controlled the match from start to finish.

A record setting night at Old Trafford was topped off by a James winner.

Mason Greenwood played a superb ball over the top for Bruno Fernandes to head it into James’ path. The Welsh winger used the outside of his boot to finish and make it 9-0.

A great night for the lads! Especially for James to come off the bench and score, too.