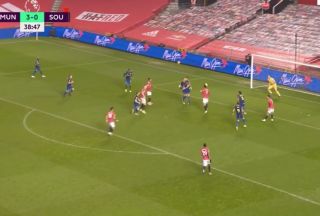 It was the perfect header from Edinson Cavani who powered the ball into the corner.

Although he wears number 7, Cavani’s sixth of the season was a typical number 9 goal. He deserves to be starting every game in the league now because he’s without question our most lethal striker.

The goal came from another Luke Shaw with the left-back on fire against his former club tonight.

It’s a good sign to see Cavani back amongst the goals.