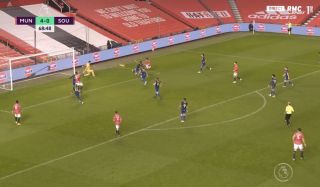 Manchester United number-nine Anthony Martial has poured salt into Southampton’s wounds after unleashing a rocket of an effort.

The French forward who has been somewhat out of his usual clinical form was introduced during half-time and he hasn’t let his manager down.

In what was another brilliant move from United who are putting 10-men Southampton to the sword, Martial broke free and executed a superb run.

Latching onto the end of a ball into the box, the classy striker took control with his chest before smashing it into the roof of the net.