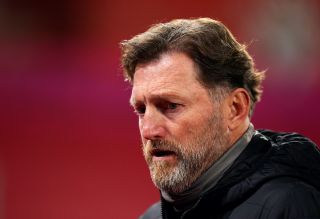 Manchester United play host to Southampton in the Premier League on Tuesday night.

We caught up with Press Association journalist Simon Peach, who despite supporting Southampton covers Manchester United closely, and is one of our go to journalists for reliable news on the club.

I asked Simon about Southampton this season, what it’s been like covering Manchester United during the global pandemic, and how he sees the game going.

Dale: Southampton started the season strongly but have tailed off lately. The FA Cup win over Arsenal also gives you something to look forward to and we really enjoyed seeing you beat the Scouse. Tell us about the job Ralph Hasenhuttl has done?

Simon: “When we were linked to Hasenhuttl after Mark Hughes’ belated exit, I’ve got to say I didn’t believe it. I was on holiday and had to message a few people to stand it up. I mean, he did well at RB Leipzig and, frankly, we were a mess so why would he come to us? It got messier before it got better – don’t mention that bloody game in October 2019 – but things are on the up now and it is great to have someone like him in charge. Saints are playing in an aggressive, exciting style with likeable players under an affable manager. Things have gone a little awry of late but that is down to injuries and fine margins. Saints have missed key players across the festive period as the frantic schedule and demands of the high-pressing style took its toll on a relatively small squad. Hopefully those issues will ease in the coming weeks and we can end the season on a high.”

Dale: What has it been like to cover Manchester United during a global pandemic? How has it changed your job?

Simon: “Well, I am spending a lot more time at home. Whereas before I would travel around Europe, and sometimes further afield, covering United, I am now working from home unless I am at games. Pre-match press conferences are done virtually and the same goes after matches, meaning I’ve swapped shivering in a mixed zone waiting for the players to shivering in my seat waiting for Ole to come onto the post-match Zoom. I am not for one second complaining as it is a privilege to be there but the dynamics are a lot different. Most importantly, it really is not the same without fans in the ground.”

#MUFC teenager Teden Mengi has completed his loan move to Derby for the remainder of the season. The defender will get some much-needed first-team football at Wayne Rooney’s side pic.twitter.com/x8RSODTH0J

Dale: Which Southampton player has impressed you most this season?

Simon: “It would be hard to pinpoint one player. James Ward-Prowse has been fantastic having progressed as a player, leader and, to be honest, a bit of a shithouse. Danny Ings has been brilliant when fit and I really like the way Stuart Armstrong plays, while our full-backs Kyle Walker-Peters and Ryan Bertrand have stepped up impressively. I guess the player that has impressed me the most is Jannik Vestergaard. Signed as replacement for Virgil van Dijk, he struggled to impose himself and get up to the pace of the English game when he joined. I, like so many other fans, had practically written him off to the point that when Leicester were sniffing around him last January I wanted Saints to bite their hand off. But credit to the coaches and the player as he has come on superbly. He is a man mountain at the back and his range of passing his absolutely superb. He will be sorely missed at Old Trafford on Tuesday.”

Dale: Who, as things stand, is your Premier League player of the year?

Bruno Fernandes at this point. Yes, he was not at his superb best in January but he has been vital for United this season and I love watching him when he’s on his game. Hopefully he won’t be on Tuesday… (even if it is to the detriment of my fantasy team)

Simon: “1-1. That feels very hopeful given the sheer number of injuries Saints are dealing with but, if we have enough in our legs, I think our pressing will force United into mistakes in the wrong areas. I fear I am overly optimistic, to be honest.”