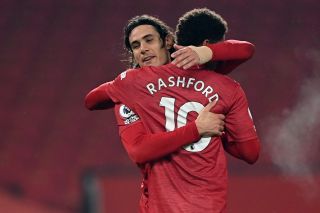 Wow, what an extraordinary night at Old Trafford as the 2020/21 season continued to baffle and amaze.

Games with Southampton are often tight, but this time there was no need to worry as United did something I’ve never seen before in a Premier League game as Ole Gunnar Solskjaer’s tricky Reds did a madness and hit nine (yep, NINE).

From the moment Alexandre Jankewitz went from Saint to sinner after 74 seconds, the result was never really in doubt but even the most ardent United fan couldn’t possibly have foreseen the carnage that would unfold.

Here, we take a look at what happened on an unbelievable night at Old Trafford.

I wasn’t quite four when Manchester United set a Premier League record in a 9-0 victory over Ipswich in March 1995. Before my time and only a memory for many a misty-eyed Red. 26 years on and United have equalled that feat with the joint biggest-ever victory in the top flight. Saints have set their own piece of unwanted history by losing 9-0 in successive seasons, with Brendan Rodgers Leicester inflicting the same fate on them back in October 2019. But only two managers have ever done so at home before – two blokes by the name of Sir Alex Ferguson and Ole Gunnar Solskjaer. Sound familiar? The Ipswich romp preceded Ole’s time as a player at the club, but the master watched his protege perched high up in his lofty position in the director’s box. Even when leading 4-0 at half-time, you never would have predicted this but the rampaging and rampant Reds were clinical, hungry and showed no mercy. Even in a season where you have to expect the unexpected, I saw something I’ve never seen ever seen before. Another couple of minutes and United could well have hit double figures and held the outright record for themselves..

United finally dish out a thumping… and how!

Too many times this season United have won games by the skin of their teeth and when flying by the seat of their pants – climbing up the league despite a string of narrow, often nervy, wins that did nothing for those of a nervous disposition. It came back to bite us against Sheffield and was never going to be sustainable. With the spectre of Southampton looming – a team who often give us palpitations – I expected this to be no different, as their 96th minute leveller in the corresponding fixture and Edinson Cavani’s late, climb-off-the-canvas heroics at St Mary’s perhaps testified. Only Leeds United had been on the wrong end of a thumping as United raced into a 2-0 lead inside three minutes, and went on to win 6-2.. a result many of us thought would surely be our biggest of the season. The Reds had been due to deal out a thumping and duly obliged in spectacular style.