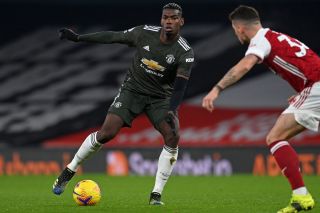 Paul Pogba has been voted Manchester United’s Player of the Month for January.

The Frenchman turned a corner as we entered 2021 and has been rewarded for his performances of late, picking up 55% of the vote on the Official App. It’s only the fifth time he has won the award since returning to the club from Juventus in 2016.

There is no doubting Pogba’s influence since the turn of the year and we hope to see him lift the side again, against Southampton with the Red Devils looking to get back to winning ways in the Premier League.

In January, Pogba scored the winning goal against Burnley and Fulham — but there’s been a lot more to his performances than goals. He has performed consistently but tonight is another huge test for him to prove himself.

Luke Shaw was runner-up with 41% of the vote, while skipper Harry Maguire picked up 4%.

I probably would have given the award for January to Shaw but that takes nothing away from Pogba because every Red should be delighted to see an upturn in his performances.

How long it lasts is anyone’s guess.