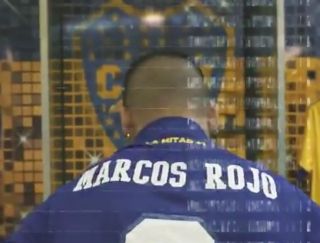 Marcos Rojo has returned to his homeland after a frustrating end to his time at Manchester United.

The Argentine has completed a permanent move to Boca Juniors from the Red Devils.

He underwent a medical at Boca’s training ground on Monday before officially being unveiled.

After seven years in Manchester, Rojo’s departure was marked with an official statement from the club’s website, which reads: “Manchester United defender Marcos Rojo has completed his transfer to Boca Juniors, for an undisclosed fee.

“The 30-year-old will return to his homeland on a permanent basis, after agreeing terms with the reigning Argentinian champions.

“Everyone at the club would like to wish him all the best for the future.”

🔴 We'd like to thank Marcos Rojo for his time at United and wish him the best of luck for the future! 🇦🇷#MUFC

We would like to wish Rojo all the best with his return to Argentina and joining Boca.

He leaves the club without a single appearances to his name in the current campaign which tells you all you need to know about him not being part of Ole Gunnar Solskjaer’s plans.

Rojo joined United back in 2014 and went on to make 122 appearances for the club across all competitions, scoring two goals.

Fresh on the agenda for the former Sporting Lisbon centre-back is helping Boca retain their Superliga Argentina title, and we’re sure the Boca fans will love Rojo’s new tattoo!

Read more: Manchester United should be at least trying to sign Dayot Upamecano