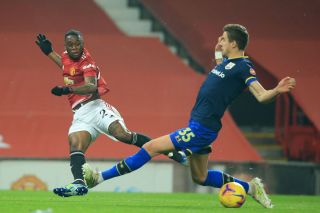 Manchester United returned to winning ways with an astonishing 9-0 victory over Southampton at Old Trafford in the Premier League.

Ralph Hasenhuttl’s Saints’ were demolished by the rampant Red Devils as they failed to recover from the dismissal of Premier League debutant Alex Jankewitz in the second minute. The Red Devils were exhilarating going forward with exceptional performances across the pitch coming from Scott McTominay, Luke Shaw, Edison Cavani and Fred. The pick of the bunch and the player in focus tonight is right back Aaron Wan-Bissaka who impressed with his excellent performance for United.

The Croydon-born full-back broke the deadlock in the 18th minute when he finished excellently at the back post from an inviting Luke Shaw cross. Wan-Bissaka provided an attacking outlet on the right flank throughout the match as the Red Devils ran up a cricket score against the depleted Saints’.

The 23-year-old full back got his second assist of the season in the 90th minute when he delivered a wonderful cross to Anthony Martial to score to make it 8-0 to Manchester United. Wan-Bissaka’s improvement going forward is there for all to see this season with the right back continuing to showcase his attacking development.

His attacking development under the guidance of Ole Gunnar Solskjaer is finally showing results with the full-back becoming an important attacking outlet.

The “Spider” is one of the best defensive full backs in the Premier League with his one on one defending his strongest attribute. Another impressive aspect of his game is his excellent tackling ability which was evident in tonight’s performance when he put in a last ditch tackle to deny Saints’ midfielder Stuart Armstrong a goal scoring opportunity.

If the excellent young defender can continue to develop the attacking side of his game the right back position at Old Trafford will be his for years to come.