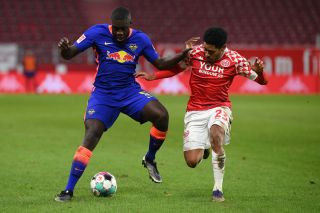 Ole Gunnar Solskjaer will be in the hunt for a new centre-back in the summer. Presumably someone to partner Harry Maguire for the long-term, although Eric Bailly has had several brilliant performances alongside the captain.

We are going to take a look at some options for the left-sided defensive role who could make their way to Old Trafford. I just hope this is an area they financially back Solskjaer to strengthen in the summer because it could be a major step in moving to another level.

Manchester United’s defensive frailties have come under serious criticism this season How after spending so much money on Harry Maguire do these problems still exist? It’s a fair question but it’s time to stop beating around the bushes. We want answers, solutions and to see the team improve.

Maguire is probably the best defender at the club. He makes mistakes but at the same time he’s added solidity at the back. Victor Lindelof blows hot and cold but I never thought he was a better defender than Eric Bailly, who let’s face it can’t seem to stay fit to warrant to big run in the side.

Phil Jones is still at the club but Solskjaer has shown Marcos Rojo the door. Chris Smalling was eventually sold to AS Roma last summer so there’s room to add to our squad. Solskjaer must ensure he adds quality after clearing out the deadwood.

Our issues in defence have long existed, so United should be willing break the bank for a top defender and Dayot Upamecano has a release clause in play this summer at RB Leipzig. If United can keep him away from Bayern Munich it would be a fantastic coup but I wouldn’t get your hopes up.

Leipzig are currently second in the Bundesliga behind champions Bayern Munich, so he’s playing at a high standard and is approaching his big career move. It may be worth checking some Bundesliga odds because they’ve been somewhat of a surprising package this season to have back-to-back strong campaigns in the Champions League.

Upamecano is a player who plays regularly, is young and good on the ball, athletic, strong, and mobile. He’s the one I really want to see at United.

This is one of the most sought-after young defenders in Europe, and I would go as far to say he’s the best defender in the Spain national side at the moment. Fans of Sergio Ramos may take offence with that, but they should be able to admit that he’s at the wrong side of his 30s and most United fans put their nose up at reports linking him with a move to Old Trafford.

Nevertheless, the transfer rumour mill in football never stops. Some clubs, United included, draw every name in the book. I would be very surprised if Pau Torres wasn’t on Real Madrid’s radar this summer, so this is one United would need to work on because his future may be solved before the end of the season.

Torres is attracting interest from Real Madrid, Barcelona, Juventus and Chelsea. No mention of United but he should be considered.

If it comes down to it and United run out of options (let’s say Upamecano joins Bayern Munich and Torres signs for Real Madrid), Koulibaly should be seen as a backup because there’s no denying that he would improve our defence.

This summer he risks letting his career slide away. How many years have we seen him linked top clubs in Europe but remained at Napoli? Time is no longer on his side but United can’t afford not to strengthen at the back.