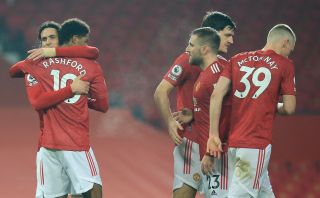 Another clean sheet as Saints consolation was controversially revoked. Led well on the front foot. 8

Operated in Southampton’s half for virtually the whole game. Second clean sheet in three days. 8

Stunning deliveries for Wan-Bissaka and Cavani as he effectively operated as an extra left-winger. Outstanding attacking intent from a man in the form of his life for United right now and earned a welcome rest. 9

Fifth goal of the season struck as sweetly as they come. Fortunate to escape serious injury after Jankewitz’s horror tackle but he enjoyed his freedom thereafter. 9

Helped United move ball quickly as they immediately capitalised on man-advantage. Filled in at left-back with no qualms after the break and played number of excellent passes. 8

Afforded far more space than at the Emirates and a clear threat from distance. Glorious through ball for Martial allowed Frenchman to crash home United’s fifth and took penalty well. 8

Took 15th goal of the season well and forced Bednarek to bundle in United’s third. Good hour’s work after a quiet few weeks. 7

Superb assist for Rashford’s goal after timing run to perfection and unfortunate not to have a goal of his own. 7

Dispatched Luke Shaw’s perfect cross with predictable expertise. Solskjaer’s luxury to take him off at half-time means he will almost certainly lead the line against Everton. 8

Ended eight-game goal drought in fine style by smashing past Mccarthy after bringing down Fernandes’ pass. Won the penalty for United’s seventh and thrashed home the eighth. Fine return albeit in favourable circumstances. 9

Will be disappointed not to have started but was fairly effective from the bench. 6

Rare run out highlight United’s dominance in the game and got his goal. 7