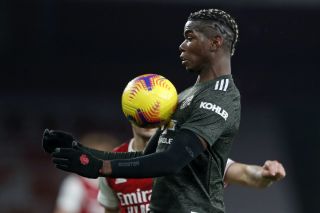 We now know who Luke Chadwick thinks should replace Paul Pogba, should the Frenchman leave Old Trafford this summer.

Speaking exclusively to CaughtOffside, the former Manchester United midfielder expressed disappointment at the thought of Pogba leaving in the summer.

He still went on to say he’d like to see the Red Devils spend whatever it takes on Aston Villa star Jack Grealish after his superb form in the Premier League.

On top of that, Grealish is getting better each year and has now added rare consistency at the top level, only what we’ve come to expect of top players.

Chadwick is convinced Grealish would take United to another level.

“I think it would be disappointing if Pogba left because he’s just coming into form and playing some of the best football he’s played,” Chadwick said.

“It could be that that’s because he’s looking for a move at the end of the season. But there’s no one like Pogba in world football in terms of what he offers with his style of play. When he’s good he’s very good, when he’s bad he doesn’t offer much to the team.

“It could offer Van de Beek more game time and I’m sure there’ll be a lot of interest in other players in that central midfield area. You imagine if he’s going to spend a lot of money it’ll be someone who’ll play, rather than just being a squad player.

“It’ll be interesting to see if Pogba goes, what they do with the finances, if it will be to put that money into another central midfielder or to strengthen other areas, like with Sancho.

“For me the one player I’d look to break the bank for is Jack Grealish, who has looked one of the best players in the Premier League for Aston Villa. If he was surrounded by the kind of calibre of player he would be at United I think he could be an absolute world class player in a few years’ time.

“He looks to be positive every time he gets the ball. He can make things happen from deeper areas, he can travel with the ball.

“He always had great promise coming through at Villa and now you can see he is someone who deserves to play at the top, top level on a massive stage.

“Obviously he’s a Villa boy, a Villa fan, but he’s the one player in the Premier League at the minute who could take United to the next level.”

I would be more inclined to urge Ole Gunnar Solskjaer to sign a world-class holding midfielder. That’s what I think could make the biggest difference to this United side and take us to another level.

Grealish is fantastic but I feel we already have Bruno Fernandes and Donny van de Beek is a squad player as things stand.