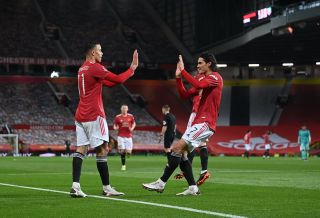 Ole Gunnar Solskjaer has included Mason Greenwood in his Manchester United starting lineup to face Southampton in the Premier League this evening.

United can go level on points with league leaders with Manchester City with victory against Ralph Hasenhuttl’s side at Old Trafford.

Ole Gunnar Solskjaer’s side need a response after a disappointing week where just one point was picked up from a possible six against doomed Sheffield United and Arsenal.

The United boss has made just one change as he attempts to elicit a positive reaction against the 11th placed Saints.

Mason Greenwood returns in a triple-pronged attack alongside Edinson Cavani and Marcus Rashford as Paul Pogba drops to the bench.

Scott McTominay has recovered from a stomach problem that forced him off against Arsenal at the weekend to regain his spot in the midfield axis with Fred.

Solskjaer has retained his preferred back four that kept a clean sheet at the Emirates.

See reactions from fans and journalists to this evening’s team news via Twitter below:

Didn't think tonight was a night for McTominay-Fred, so surprising Pogba isn't in the XI. Although #mufc's easiest league win against Leeds was with McTominay and Fred. Greenwood deserves to be recalled.

Van de Beek is a surprising omission for #MUFC tonight, especially with Pogba rested. A Fred and McTominay partnership possibly too cautious against Southampton.

Our XI for tonight: pic.twitter.com/NB1eYGd3yA

Today is the Mason Greenwood's day. Bookmark it.

Strong team that but our main issue is actually getting the ball in the back of the net after the last couple of games so I would like to see Greenwood grab a couple.

Greenwood for Pogba tonight.
Hope to see everyone performing better.
Building successfully from the back is the key against them.#MUFC #MUNSOU https://t.co/JeVpdwXJFc

Surprised to see McTominay and Fred start as the two in midfield tonight. Considering the selection problems Southampton have, I would have liked to have seen us go for it a bit more with Pogba in there. Greenwood definitely deserves a recall ahead though. #MUFC