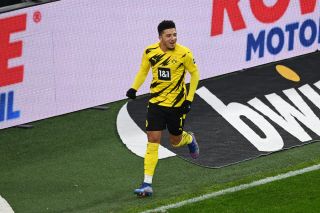 Former Manchester United midfielder Luke Chadwick has warned his old club that it’s crucial they qualify for the Champions League if they plan to make signings like Jadon Sancho.

Manchester United were linked closely to Jadon Sancho last summer, although a deal never materialised. The Reds couldn’t come to an agreement with Borussia Dortmund, with both clubs seemingly miles apart in their valuation of the player.

To this day United are lacking in the right wing department and in many ways that makes it more difficult to hurt the teams we play every week.

It is a better functioning team than what it was previously, but Ole Gunnar Solskjaer needs to address the issues United have on the right flank in the summer.

Luke Chadwick seems to like the idea of United signing Sancho, but in an interview with CaughtOffside he warned that the club need to ensure they finish high enough to secure Chamions League qualification in order to attract players of his calibre.

“Sancho’s a hugely talented player, I think any club would want to have him in their squad,” Chadwick said. “He’s not been at his very best this season for Dortmund, but he’s a young boy with incredible potential.

“We’ll have to see what the price will be for Sancho. I think what was quoted last summer seemed quite high, albeit for a fantastic player.

“I’m sure there’ll be many clubs in for him and that’s another reason United need to finish the season strongly. Whether they finish, 1st, 2nd or 3rd – they need to be in the Champions League without qualifying matches to play in order to attract players of the standard of Jadon Sancho.

“They obviously spoke to him before and looked close to getting him last summer which could give United a bit of a head-start. He wanted to go to Manchester United if what you read is to be believed, so that could put them in pole position, but it will be interesting to see what other clubs come in for him and are prepared to pay the money for him.”

Sancho is a great player but the player touted for his signature last summer was crazy.

I can’t help but wonder if we would get better value for our money elsewhere.

For instance, I don’t remember many standout England appearances, and this is a player Borussia Dortmund previously demanded over £100m for?