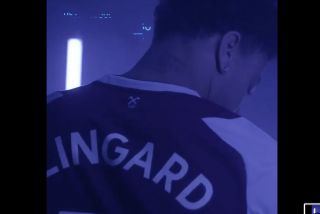 Manchester United’s on-loan midfielder Jesse Lingard could be in line to feature for new-side West Ham United against Aston Villa on Wednesday.

Lingard, 28, teamed back up with former manager David Moyes last week after the Red Devils opted to sanction a move in order to gift the Englishman with valuable game-time.

Since the emergence of form in Paul Pogba and Bruno Fernandes, the United midfielder has struggled to nail down a spot on current manager Ole Gunnar Solskjaer’s first-team plans.

Consequently, Lingard’s game-time has been few and far between, however, in an attempt to reignite his stagnating career, the 28-year-old has found himself on a short-term loan with the Hammers.

Fans of Lingard who will be watching how he fares in London will be keen to learn when the Englishman is expected to make his Hammers debut.

Well, according to Moyes, Lingard is being eyed to feature in the club’s mid-week domestic clash against Dean Smith’s Aston Villa.

Speaking to the club’s official website, Moyes, when asked about Lingard, said: “Hopefully Jesse [Lingard] is fine for midweek at Aston Villa and we can add him to the group because we just can’t afford to pick up any injuries.

“Hopefully we’re OK at the moment but we’ll have to wait and see.”

West Ham currently sit fifth in the Premier League table, and will be hoping Lingard’s vast top-flight experience can help them continue in their quest for European football next season.