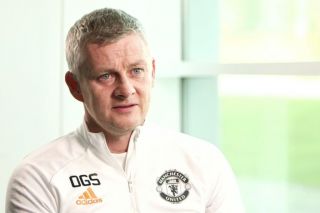 Ole Gunnar Solskjaer gave a team update at his press conference ahead of Manchester United’s league clash against Southampton.

The players go into the game after travelling to London on Saturday, but at least the manager doesn’t have any fresh injuries to worry about.

They’ve not had a lot of time on the training pitch but there will be no excuses when they take to the pitch tomorrow night — after two back-to-back disappointing results.

“Apart from the wear and tear and quick turnaround everyone should be available, they’re not injured anyway, it’s just a matter of energy levels and see how they feel tomorrow, so new fresh injuries anyway,” Ole Gunnar Solskjaer told reporters, as per Manchester Evening News.

“It’s not been time to do a lot on the training pitch, the boys that played are still on the recovery track from Saturday night but they have to prepare for the game tomorrow night, it’s right in between for them, the session was light but some scored goals, wanna get that mojo back, that spark, created enough chances to score the goals now it’s about feeling good, taking a deep breath and putting the ball between the posts.”

The manager also advised fans not to stay up late on transfer deadline day expecting any incomings. He added that Phil Jones is still part of his plans once he gets fit again.

“I can confirm there won’t be anyone coming in, so don’t stay up late. Phil [Jones] has been recovering from a knee injury, an operation he had, he will be included on the list and hopefully he’ll get his fitness back sooner rather than later and be available to play.”

Manchester United are not interested in Dzeko. You can forget about that one. #MUFC

United’s biggest task at hand right now is beating Southampton. Solskjaer previewed our next opponents, saying: “I expect them to have a similar team to what we played against, a strong XI, they’ve got many injuries over the course of the season with the football they play, high intensity, direct, loads of energy, they’ve had a patch with loads of injuries, when players come back, come back too early, I’ve been lucky in that respect, strong and fit and healthy squad.

“They’ve had to ask a few times I’ve had to leave players out with a few niggles. Hopefully they can get theirs fit soon because this season is relentless.”

As for United’s challenge for the rest of the season, Solskjaer added: “We wanna keep on trying to dominate games, we need a little bit of brightness, spark up the last third, take chances, I don’t like to bring these up – the momentum shifted for us with the Sheffield United game – but I’ve got the delegates report through from the ref and the two decisions were wrong – they admitted their goal should have been disallowed and ours should have stood.

“That’s a big, big momentum changer for us, when you go 1-0 up and that’s fine margins and it has been the way this season, you hit the post, it foes in or out, sometimes you’re lucky sometimes not, gotta focus on this game and results and performances will come.”

Southampton won’t be easy to play against and I would be expecting them to play in a 4-4-2 formation. Danny Ings has been in terrific form this season and he will be a real danger man.

James Ward-Prowse is another player we should be wary of. You don’t want to be giving away too many set-pieces against the Saints, especially given our track record defending corner kicks.