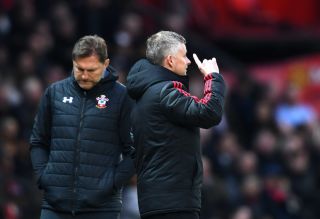 Manchester United have taken just one point from their last two games and will be desperate to bounce back when they host Southampton on Tuesday.

The Red Devils come into Tuesday’s domestic clash against a tricky Southampton side in second place in the Premier League table.

It’s hard to imagine that United, who have played one game more than rivals and first-place Man City, will be able to settle for anything less than all three-points, if they’re to remain in the title conversations.

Despite enjoying a brilliant first-half to the 2020-21 season, now might be the perfect time to play the Saints.

Ahead of Tuesday’s important match-up, we have predicted how we expect to see Ole Gunnar Solskjaer line his Red Devils up.

Arguably the above line-up is United’s strongest starting 11 on paper, however, with major concerns over Donny van de Beek’s happiness, fans may get to see more of the Dutchman on Tuesday.

Elsewhere, Shaw should retain his starting spot as his side’s first-choice left-back with Bailly set to replace Victor Lindelof as partner to captain Maguire.

And finally, up the top end, I expect to see Martial remain benched following his abysmal form with Cavani continuing to nail down the leading striker’s role.