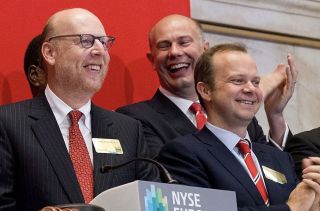 According to reports, Manchester United’s vice-executive chairman Ed Woodward and owner Joel Glazer were embroiled in a heated row, over whether or not to bid enough for Jadon Sancho during last summer’s transfer window.

However, despite their well known interest, an agreement between clubs was unable to be reached which resulted in the 20-year-old remaining in Germany.

Largely down to the fact the Black and Yellows had stuck an eye-watering £108m price-tag on his head, United failed to land Sancho, despite late speculation they’d go all out to secure his services, as per Sky Sports.

According to a recent report from The Athletic, there were pockets of the Red Devils’ hierarchy who were prepared to offer Dortmund a whopping £108m on deadline day.

It has been claimed that Woodward was willing to cave on his initial stance that the club would not pay that much during a pandemic, but Glazer insisted ‘it was too much money’.

The pair are believed to have been involved in a row which inevitably ended up with Glazer getting his own way.

Whether or not United will reignite their interest in Sancho this summer remains to be seen, but fans will live in hope.