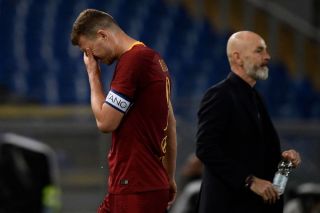 Dzeko, 34, joined Roma from United’s arch-rivals Man City, initially on-loan in 2015 before making his switch permanent the following season in a deal worth £9.9m, as per Transfermarkt.

Despite being one of Europe’s most consistent and prolific marksman, Dzeko is rumoured to be axed from Roma’s squad after a recent period of turmoil signalled the Italian club requiring a new direction, as per Calciomercato.

During the last week or so, there have been suggestions coming out of Italy that the experienced forward’s entourage is eyeing a move to none other than United.

Shockingly, it’s hard to foresee Dzeko ever making a switch to Old Trafford, especially after he was part of Man City’s squad who pipped United to the Premier League title in 2012, on goal difference.

Despite the audacious rumours, the latest in the ongoing saga comes from Corriere dello Sport, who have claimed the 34-year-old forward has once again been offered to the Red Devils.

With just a hours left in the winter transfer window, it is exceptionally hard to imagine a late agreement being reached.

However, that hasn’t stopped the rumour mill hinting that fans could be set to see Dzeko turn out in the Premier League, six-years after departing.