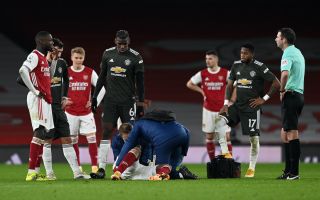 This episode of the Strettycast is a reaction to Manchester United’s goalless stalemate with Arsenal at the Emirates.

The mood has worsened between Dale and Mike because the knock-on effect of drawing with Arsenal feels worse. At the same time, there’s no point throwing our toys out of the pram. A lot of the problems we’re having on the pitch are issues that have been previously discussed on the Strettycast.

It’s important to realise this is still a United side in transition. One that, not long ago, looked like it was on the cusp of showing enough consistency to challenge for the Premier League title. Now we’re edging towards a fight for the top four.

United host Southampton on Tuesday night before playing at host again to Everton the following Saturday. Then it’s West Ham in the fourth round of the FA Cup — once again at home.

Like last week, we answer a few of your questions sent in via Stretty News’ Facebook Group.

Thanks again for reaching out and sending your feedback on the podcast to dale@strettynews.com.

Next week we will have a special interview with former Manchester United player Ben Thornley.

In the early 1990s Thornley was regarded as superior to Ryan Giggs, Paul Scholes and David Beckham — but a bad tackle shattered those dreams.

We will be talking to Thornley about a range of topics, including Phil Neville’s recent decision to move to the United States.