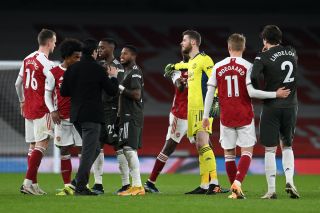 What a difference a week makes in football.

Manchester United went top of the league recently, off the back of a great run of results and one side of the United fanbase went very quiet, one side got louder.

On the one hand, you have the fans who are just that, fans. Love the club, love football and enjoy it for what it is. Taking pleasure in the good times, allowing themselves to be happy when things are going well and develop a bit of a chirpier demeanour, heaven forbid, have a bit of fun.

On the flip side, you have those who claim to be fans, a transparent bunch who are usually seen and heard from loudest when things aren’t going according to plan, when they can breed their undying negativity and their agendas against the club, the manager, the players.

A week or so ago, the likes of Twitter and Facebook were, dare I say, almost enjoyable places to be as a United fan, for a change.

There was a bit of good natured banter going on, the general feeling was quite positive and the discussions were centred around a sense of “can we keep this going?” and the odd tongue-in-cheek “we’re going to win the league!”.

We had a week where we played our greatest rivals, twice. The first, a drab league game where we could well and should have beat them, ending in a goalless draw. The second, we knocked them out of the cup in a far more exciting 3-2.

Things are going well in the United camp, top of the league (after Christmas) for the first time in a few years, knocking the Scouse out of the cup, happy days right? Isn’t this the progress we’ve all wanted for such a long time now?

We’ve had a stinker against the bottom side and got turned over.

There’s no denying it was a shocking result and a shocking performance, there’s just no defending it and I’m not going to try.

Remember that second group of “fans” I mentioned above?

There’s a really small minority of them, that are the biggest stain on our fanbase.

We got to see them in action again, sadly.

Axel Tuanzebe and Anthony Martial were subjected to a disgusting tirade of racial abuse online, over a bad performance in a football game. Let that sink in.

We went to Arsenal yesterday, again not the greatest performance in the grand scheme of things, ended in a poor 0-0 draw, we had plenty of chances to grab the win but unfortunately we weren’t clinical in front of goal and a bit pedestrian on our application.

Guess what happens next?

Another tirade of racial abuse, Rashford included this time.

Racial abuse, for not playing well in a game of football. Imagine that.

As a result of those 2 performances, the atmosphere has made a dramatic shift once again.

The sense of banter and fun has been replaced by the re-emergence of the eternally negative sector, who are frothing at the mouth after being give a chance to chirp up again.

The “#OleOut” agenda is in full force again, the targeting of players is back in full swing and now we see the cherry on top of racism.

This is all after 2 poor performances, one a draw away to Arsenal, which is rarely deemed a “terrible result” through the ages.

To those of you in the second section of the fanbase, calm down hey?

One response to “Opinion: Alright, alright, calm down”