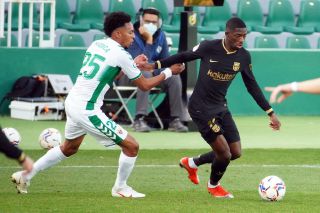 Dembele, 23, was heavily linked with a move to United during the latter stages of last year’s summer transfer window.

After missing out on number-one target Jadon Sancho, the Red Devils turned their attentions to Barcelona’s Dembele in an attempt to secure a last-minute loan deal.

at the moment as by 2 months, Jadon Sancho deal is stalling. Borussia Dortmund want €120m or nothing. It’s up to #MUFC – Dembele is the backup option and Man Utd are negotiating for a loan from Barcelona [asking for permanent]. That’s it

Despite United’s approaches, they were knocked back and ultimately ended up failing to bring the 23-year-old to Old Trafford.

However, according to a recent written report from Sport (via Sports Witness), that could all be set to change again come this year’s summer window.

The Spanish outlet claim the Red Devils’ hierarchy are going to ‘push hard’ for Dembele’s signature in the summer.

Ole Gunnar Solskjaer’s pursuit of Barcelona’s French World Cup winner could be handed a boost due to the Spanish club’s current financial crisis.

Sport’s report claims that the La Liga giants are resigned to the fact they’ll have to let at least one big name player depart in order to raise funds to help balance the books.

It has been suggested that Dembele is one of the club’s stars considered for sale.