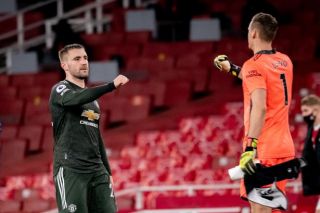 Luke Shaw criticised Manchester United for their wasteful performance at Arsenal on Sunday.

The left-back admits United gave up valuable ground in the title race by missing “countless massive chances” in their goalless stalemate with Arsenal.

The Red Devils had more possession throughout the game but were slow in their build-up play and managed only a handful of clear-cut chances on goal, with Edinson Cavani and Bruno Fernandes both guilty of squandering good opportunities.

At the other end, Arsenal went close too as Alexandre Lacazette’s free-kick rattled the crossbar.

The result means United are three points behind Premier League-leaders Man City, who also have a game in hand.

Shaw insists the game yesterday against Arsenal was there for the taking.

“[It’s] two points dropped I feel. I felt we were in control, Arsenal had a spell but we were comfortable and had countless massive chances we haven’t taken,” Shaw told Sky Sports, as per The Mirror.

“It would have been a brilliant result winning here, we have to be winning these games.

“The chances we had, I don’t think it’s acceptable to come away with a point — I haven’t been in the changing room yet but I’m sure the lads will be disappointed.

“At times we were too slow. Second half we were sloppy and gave the ball away.

“We didn’t look like we wanted to play. We created the chances and failed to score again and it cost us two points.

“We dropped points in midweek and again here. If we want to be in the title race we have to be winning these games. I don’t know what more to say.”

United take on Southampton in the Premier League at home on Tuesday night.

It’s another opportunity to bounce back and Southampton’s form has dropped off a bit in the league over the past two months, after starting the 2020-21 campaign brightly.

The Red Devils will be up against it after dropping points in their last two league games.