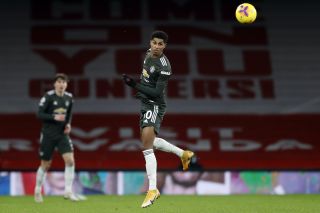 Marcus Rashford, Axel Tuanzebe and Anthony Martial have all been subject to racist abuse after Manchester United’s last two outings in the Premier League. The GMP are getting involved.

Greater Manchester Police have issued a statement condemning online racist abuse suffered by Manchester United players in the past week.

Marcus Rashford was the latest victim of some horrific online abuse after United’s goalless stalemate with Arsenal on Saturday night.

The forward took to Twitter and described the abuse as “humanity and social media at its worst” and he’s not wrong.

It follows abusive messages sent to United duo Axel Tuanzebe and Anthony Martial after the 2-1 defeat to Sheffield United on Wednesday night.

The GMP are aware of the incidents and are trying to find the culprits.

A statement said, as per Manchester Evening News: “We are aware of a number of Manchester United football players suffering abuse on social media accounts between Wednesday 27 January and Saturday 30 January 2021.

“Nobody should be subject to such abuse and it is deeply upsetting not only to those who suffer it, but to all those who come across this awful language too.

“These hateful words have no place anywhere in our society whether online or otherwise.

“A number of these comments have been reported to us and we Arte leasing with those involved to provide support and we will be investigating these crimes thoroughly.

“Tackling hate crime remains a priority for GMP and we taker these reports very seriously.”

Something needs to be done about this and quickly.

Find the people responsible, shame them for being racists and ensure they are allowed nowhere near Old Trafford in the future.

The authorities should absolutely throw the book at those responsible for this vile racist abuse.