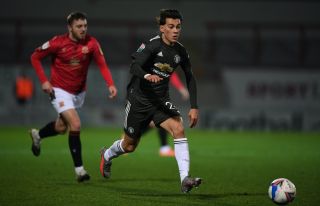 Manchester United’s new youngster Facundo Pellistri, who appears set for a loan move to Deportivo Alaves, has reportedly been attracting the attentions of some of Europe’s biggest clubs, including Real Madrid and Barcelona.

Pellistri, 19, joined the Red Devils on deadline day during last summer’s transfer window after making a dream switch from South American side CA Penarol, as per ManUtd.

After boasting a respectable record whilst playing in his native Uruguay, the young winger has been hotly tipped to become a real talent and is expected to flourish in England’s top-flight.

After arriving in Manchester six-months ago and being placed in the club’s under-23s, Pellistri has hit the ground running.

Since playing with United’s youngsters, Pellistri has racked up four direct goal contributions in just his first eight appearances, in all competitions.

In an attempt to see the youngster continue his impressive development, the Red Devils’ hierarchy are reportedly sounding out a loan move with Spain rumoured to be the most likely destination.

Pellistri is expected to join La Liga’s relegation threatened Deportivo Alaves on a short-term loan which would see the 19-year-old remain in Spain until the summer, as per Goal.

However, according to a recent report from Spanish outlet Sport, Deportivo Alaves look to have beaten the likes of  Real Madrid and Barcelona to the youngster’s signature.

Sport’s report claims both Spanish giants have recently followed up their interest in the South American winger, however, a move to Deportivo Alaves is expected to be completed in the coming days.