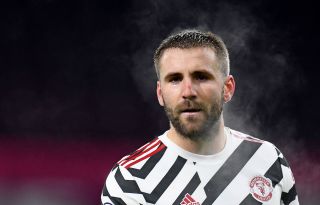 David de Gea believes Luke Shaw’s form of late is helping to further improve Manchester United as a force in the Premier League.

Shaw has been in excellent form both defensively and getting forward, making significant strides to improve in a defence that has been leaking goals all season.

Now it seems like Shaw is one of the more experienced figures in their defence, given how he plays rather than being a 25-year-old with more developments to come.

De Gea has been Shaw’s team-mate for six-and-a-half years and he recently told the official Manchester United website he feels the left-back has developed into a vital cog in Ole Gunnar Solskjaer’s set-up.

“He’s a very important player for us and when he’s fit and playing at 100 per cent I think he makes the team better.”

De Gea also opened up about what it’s been like to work with Edinson Cavani this season.

“He just wants to score goals,” the keeper added. “He’s a really experienced player who has scored many goals for many teams.

“I think everyone has seen his qualities, he always tries to score goals and is always in the box ready to jump on any mistake and take the ball and score.

“He’s a great header of the ball, he presses a lot… he’s a great player for the team.”

However, United are struggling to score goals again, with none of their forward players in form.

Solskjaer must address this soon and he will need Cavani to win us a few games until Anthony Martial, Mason Greenwood and Marcus Rashford start firing.