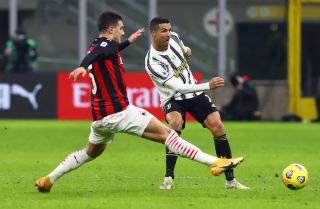 Since joining the Red Devils under the guidance of the former manager Jose Mourinho, Dalot since found himself fall out-of-favour with current manager Ole Gunnar Solskjaer.

After making just 35 appearances in all competitions for United, the 21-year-old full-back was shipped out on loan to AC Milan during last year’s summer transfer window.

Despite joining the Rossoneri carrying the reputation of a bit-part player whilst at Old Trafford, Dalot has gone on to impress AC Milan’s manager Stefano Pioli.

Having already featured 16 times for AC Milan, Dalot’s on-field contributions are going some way to seeing his temporary side challenge for their first title since 2011.

According to a recent report from The Sun, Dalot’s Italian side are keen to make the 21-year-old’s switch permanent.

The Sun claim AC Milan, like most clubs throughout the world, are having to manage their finances carefully and would therefore only be willing to offer United £15m plus add-ons for Dalot.

Other finances included in a potential deal include Dalot’s wages with the defender rumoured to earn around £40,000-per week, a figure which fits well within AC Milan’s salary structure.

United are reportedly keeping a close eye on their full-back’s progress whilst on-loan in Italy, however, with a potential offer barely amounting to what they paid for him three-years ago, an agreement seems unlikely.