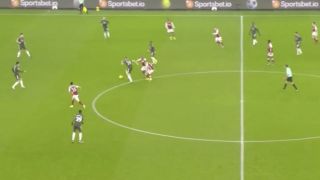 Manchester United have travelled to the country’s capital to face-off against Mikel Arteta’s Gunners.

Desperately looking to bounce back after their shock 2-1 defeat against Sheffield United earlier in the week, Ole Gunnar Solskjaer will be demanding a good performance on Saturday afternoon.

As the match’s first-half approaches it’s mid-way point, a standout performer so far has been United’s Scottish midfielder, Scott McTominay.

Lined-up in his familiar role next to Brazilian box-to-box midfielder Fred, McTominay has enjoyed a decent opening half, so far.

Arguably his best moment of play came whilst ensuring Arsenal weren’t able to be successful in their intense press.